Hi all. I am at NVIDIA GTC, back for this great event that is all about GPU’s and the first exciting news to share with you all is that Citrix now official supports the general availability of VMware vSphere 6 with NVIDIA GRID vGPU support. This means if you are Citrix XenDesktop or Citrix XenApp customer and you want to run a virtual machine “VDI” with Windows 7/8.1 combined with Citrix XenDesktop, or a virtual machine “SBC” with Windows Server 2008R2 or Windows Server 2012R2 combined with Citrix XenApp, you can now virtualize these workloads using NVIDIA GRID vGPU combined with VMware vSphere 6. This used to only possible using Citrix XenServer, this is great news if you are a VMware Hypervisor customer and a Citrix desktop delivery customer you can combine both worlds using NVIDIA GRID vGPU.

I included a visualized drawing so you can see the delivery stack. 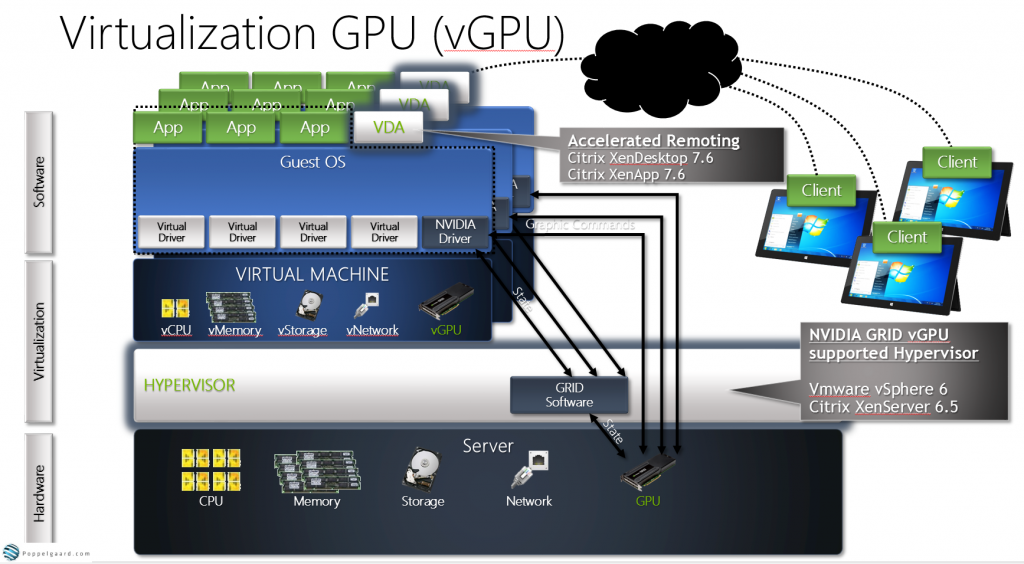 Lets look at the Citrix statement.

At Citrix, we are ready to take advantage of the promise that VMware first made at the NVIDIA GTC conference in March of 2014. The announcement was around support of a virtual graphical processing unit, or vGPU, on their vSphere hypervisor. According to today’s announcement, this vGPU support will be generally available starting March 12, 2015. It had been in tech preview to existing VMware vSGA and vDGA Horizon customers since October 2014.

What Does This Mean?

By virtualizing the GPU customers no longer need to invest CapEx in costly, dedicated graphics cards on their users’ local devices. Instead they can add NVIDIA GRID vGPU K1 or K2 cards to their backend servers hosting virtual apps and desktops on XenApp and XenDesktop. The NVIDIA driver gets loaded into the VM directly by the hypervisor allowing the vGPU to be shared across multiple users simultaneously, while maintaining the high performance they expect and require.

Citrix customers should already be aware of XenServer support for vGPU, which has been in place sinceDecember 16, 2013.

Before Citrix XenApp and XenDesktop had this capability, users of graphically aware applications required expensive and powerful workstations under their desk, each with dedicated GPU hardware locally installed. This not only severely restricted the user’s ability to work on any device from anywhere but it also opened up security and compliance concerns organization wide.

Think of it, the user would often load the data files that they needed to render with their dedicated GPU on that same local device. Often companies would need to leverage talent in different countries to deliver projects on time, sometimes working with contractors and sub-contractors. Instead of residing in the secure confines of the corporate servers, this intellectual property was loose “in the wild” and vulnerable to physical theft and misuse.

A New Way of Working

The key difference in this new way of working is to allow productive work on 3D apps and HD video from any device, anywhere without compromising either performance or security. Users get the same performance and application compatibility that had been previously limited to their local workstations, only now from XenApp and XenDesktop powered mobile workspaces.

Citrix has taken this even further, and now organizations can choose to own the virtual infrastructure necessary to deliver mobile workspaces or simply deliver them to any part of the world using a cloud service. In any case, they are free to choose whether they prefer to deploy on-premises VMware or Citrix XenServer hypervisors, or select a CloudPlatform service provider as the underlying platform.

Typically, when we talk about graphics processing and vGPU we tend to focus on the familiar graphics “user”. The CAD engineer or designer who rotate and manipulate 3D models.

But as we saw in the Microsoft preview event, even the core Windows 10 operating system has evolved into a more graphic aware platform. With this we see the growing need for GPUs in more day to day and every user scenarios. Even productivity applications like Microsoft Office with its ribbons menu, fancy transitions, and rich-graphics user interface for PowerPoint, Word and Excel products clearly can benefit from GPU.

As the newer versions become more widespread, organizations will need the most effective, secure and economical way of answering the increased demand for graphics capability. Citrix has designed XenApp and XenDesktop to meet that demand, a proven solution already deployed with hundreds of customers as we speak.

A large user base of Citrix XenApp and XenDesktop continues to be successfully deployed and officially supported on VMware’s popular vSphere hypervisor for non-graphics workloads. Citrix will offer the same level of quality support to customers who deploy XenApp or XenDesktop for NVIDIA GRID vGPU, starting from day one that VMware vSphere 6 is generally available (March 12, 2015) with the capability.