Back in 2016 I wrote about the next generation workstation, and things have evolved and at HPE Discover in Madrid, 28th November 2018, HPE announced HPE Edgeline Engineering Workstation with AMD and Citrix Cloud. The new offerings have new enhanced GPU capability with the HPE m710x and providing a dedicated GPU from AMD more specific the AMD Radeon Pro WX4100. The solution requires no hypervisors and lowers complexity while enabling the mobility of users and enhancing user experience. This solution is designed to meet the requirements of power users such as designers, architects and visualizers that require high performance with reduced physical footprint, and targeted towards 4-100 users. 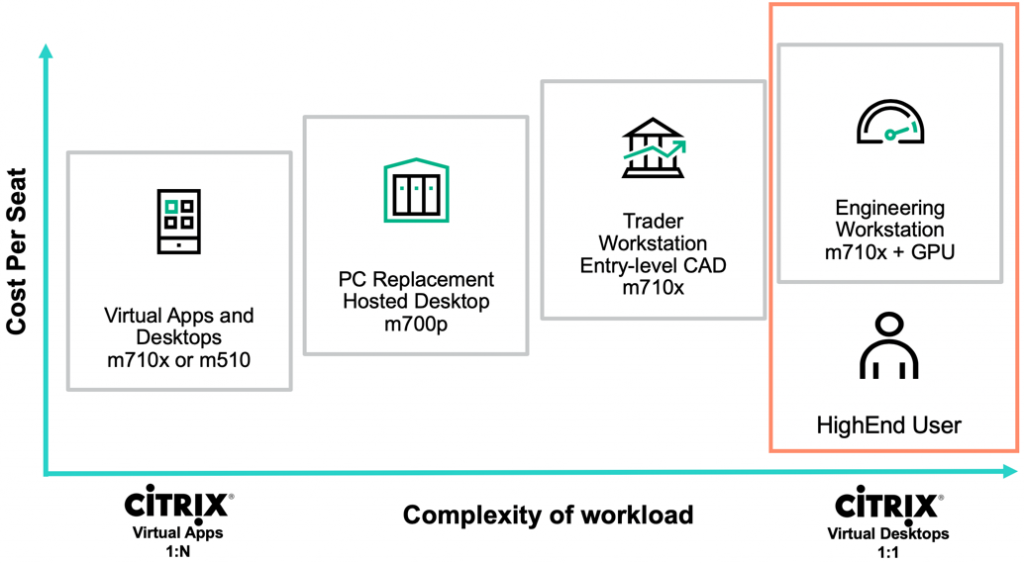 Today many high-end designers have full workstations underneath their desks, dedicated to their use.

This is clearly inefficient, as for half the day (at least) that workstation is unlikely to be in use.

Hosting these machines in a central location like IT or communications cabinet not only increases efficiency, but also centralizes data for security and ease of cross-geographical working. It also means that many other devices can be used to access the data, e.g. viewing a 3-D model of a construction site on an iPad.

(By the way you might even get better performance) 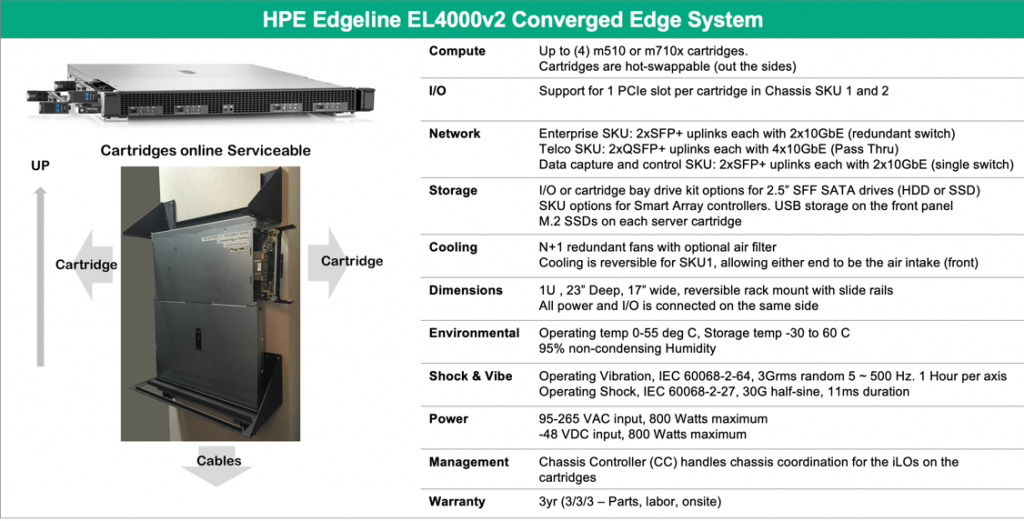 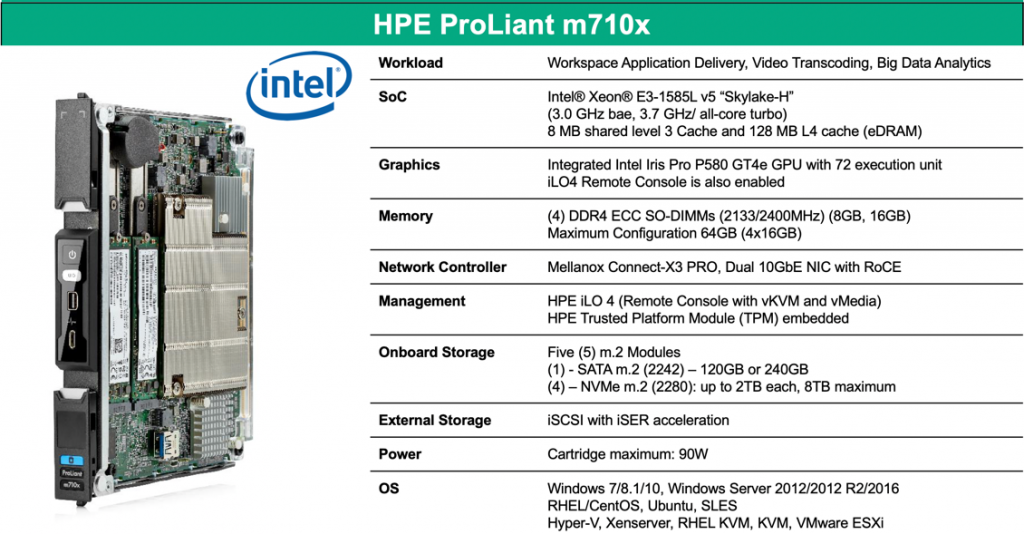 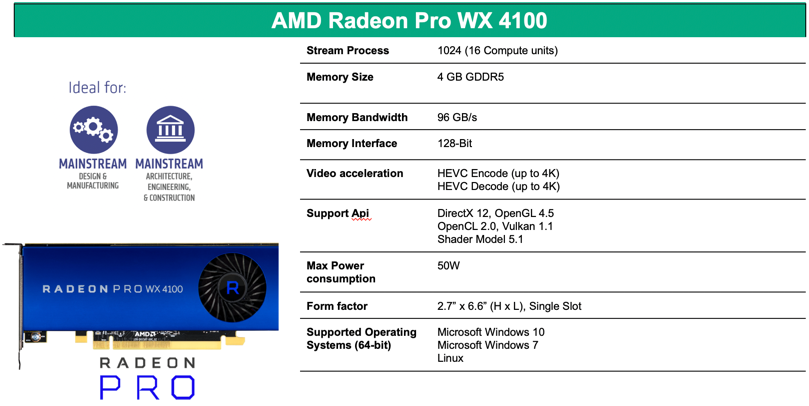 AMD Radeon Pro WX4100 is a single slot GPU from AMD, its using the latest architecture from AMD and is part of the Radeon Pro series. This GPU have 4 GB dedicated frame buffer which application demanding vendors are requiring when working in CAD/CAM/CAE. The AMD drivers are the same used for either physically Radeon Pro GPU or virtualizing the GPU or using example MxGPU. This helps simplify the driver validation process and ease of use and switching between AMD Radeon Pro GPU models. AMD is releasing drivers Quarterly and some times even monthly, the great thing about this GPU is that this is the GPU that is being used in physically workstations for Engineers and Designers. The idea of below concept is to give the user the dedicated power of the m710x (CPU, NVME, fast memory) and then dedicated AMD GPU power to the user so the user replaces their existing physically workstation and the desk and put it in the datacenter.

Now HPE has a new server appliance available and a new solution that targets a new business opportunity for SMB/medium customers. Previously you needed to buy a Moonshot 1500 solution that was a 4.3 U chassis, where you could add up to 45 server blades. This have changed and new offerings are now available from HPE. These include Edgeline. HPE Edgeline EL1000 which support up to 1 HPE Proliant server blade and HPE Edgeline EL4000, which support up to 4 HPE Proliant server blades. This is great for business that would like CPU/GPU/Fast storage and IO in small capacity but require fast performance. These appliances are also built for IoT systems. This means that HPE Edgeline is a more accessible solution for companies no matter their size or demand.

What is Citrix Cloud 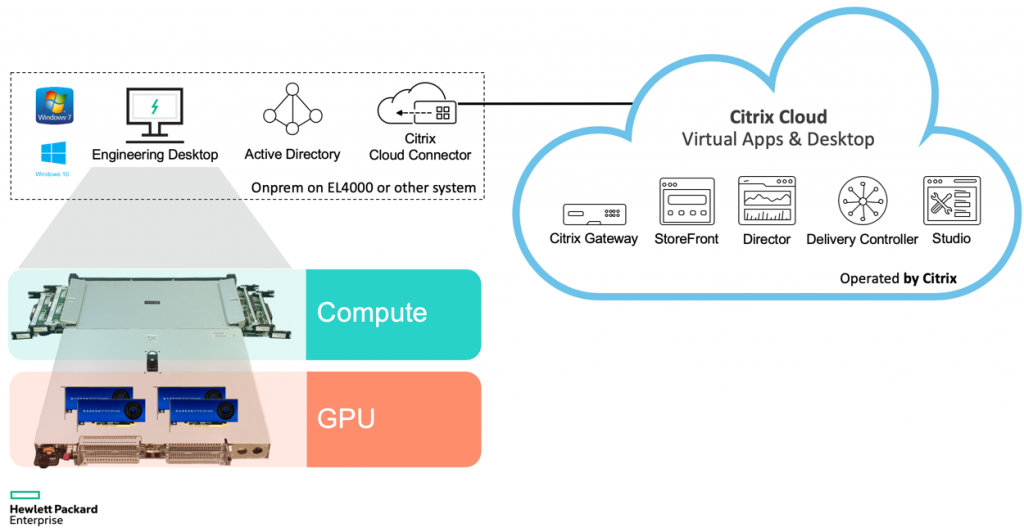 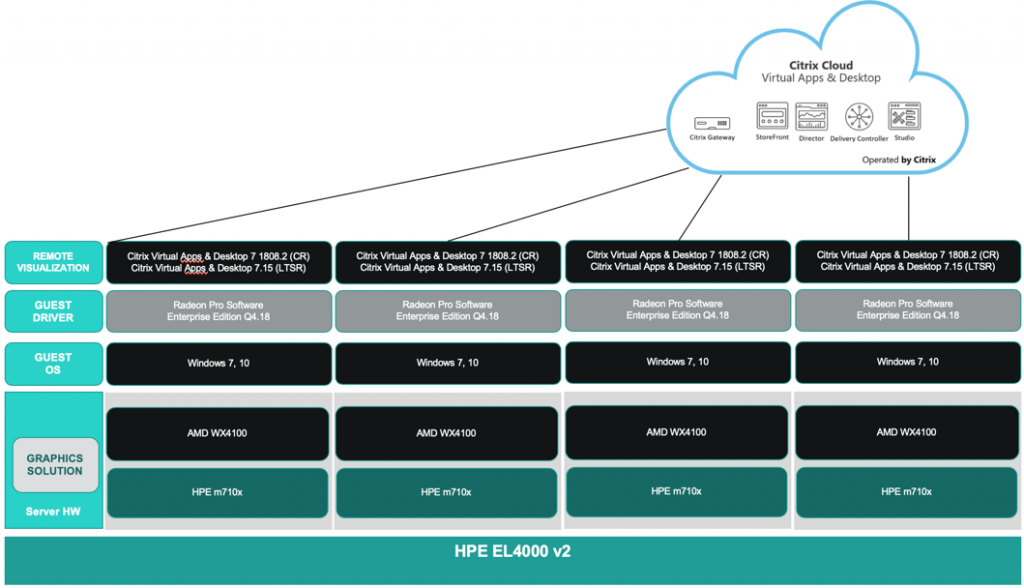 The GPU driver what is seen inside GPU-Z 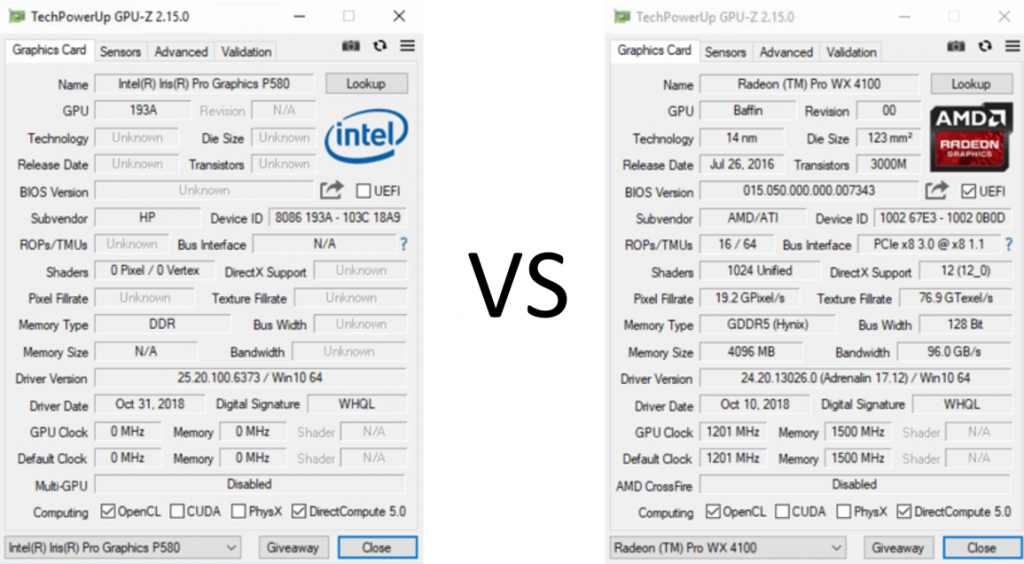 Use case and benchmarking applications

These Application are tested and benchmarked

I used this application because its a very popular CAD application in the engineer/designer BIM world. To automate it I used a tool Micrographics have developed which 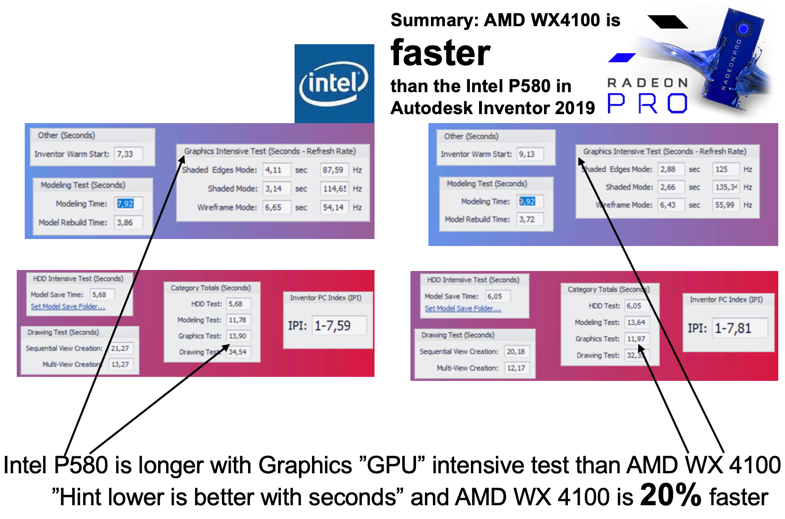 Unity game engine is one of the most famous engines used around the world for when customers are designing an application that works across any platform/device, its also popular for game companies and entertainment business such as the hollywood industry, they are using Unity when they are capturing a scene including very famous blockbusters such as Bladerunner 2049 or Ready Player One, yes these movies have been captured with Unity and its also very popular with content creators creating the next app in Augmented Reality or Virtual Reality. I have in this test used an Unity WebGL application to benchmark the GPUs which is running inside Chrome, and its correct that results will vary depending on which browser and which version this is because Google, Firefox, Microsoft is optimizing GPU engines all the time improving the user experience.

If you would like to rerun my test please do it here: 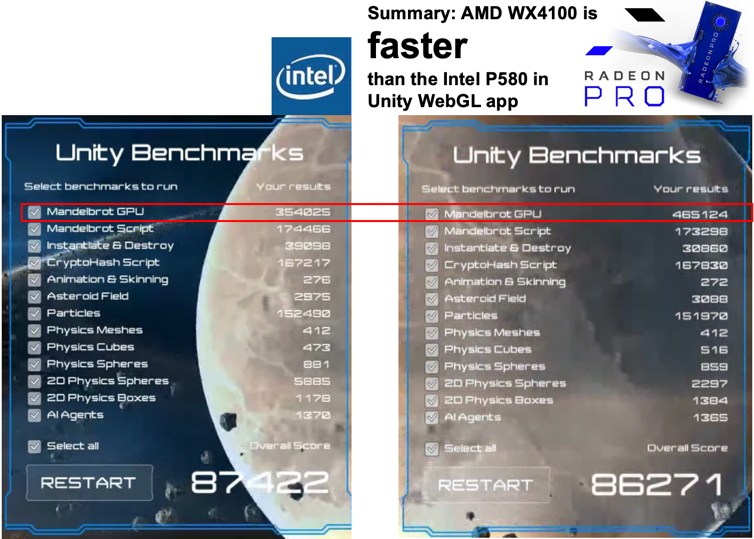 Adobe Photoshop CC 2019 is very popular for creators, engineers and designers and Adobe keep improving the user experience adding more GPU capabilities into the product, this is why I have run test with latest version and to automate a benchmark simulation I ran the Puget System benchmark that is made for Adobe Photoshop CC 2019. 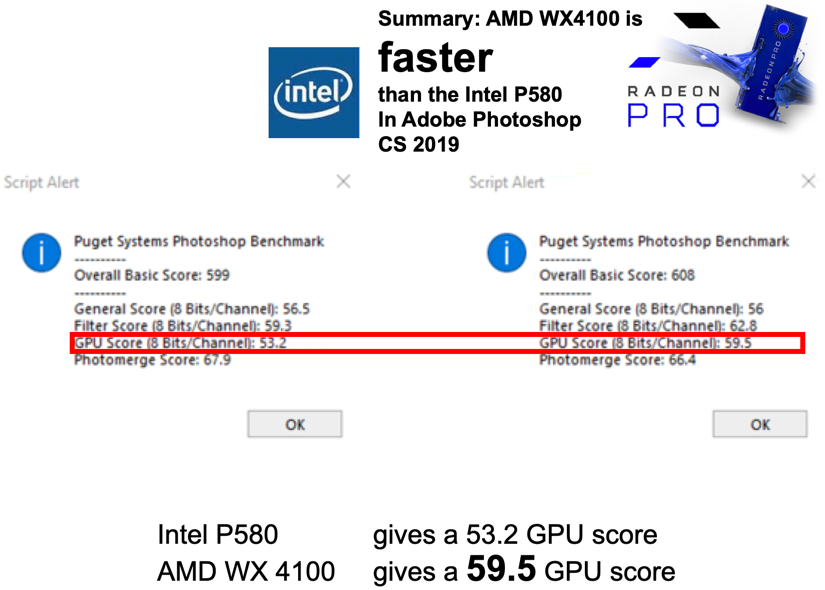 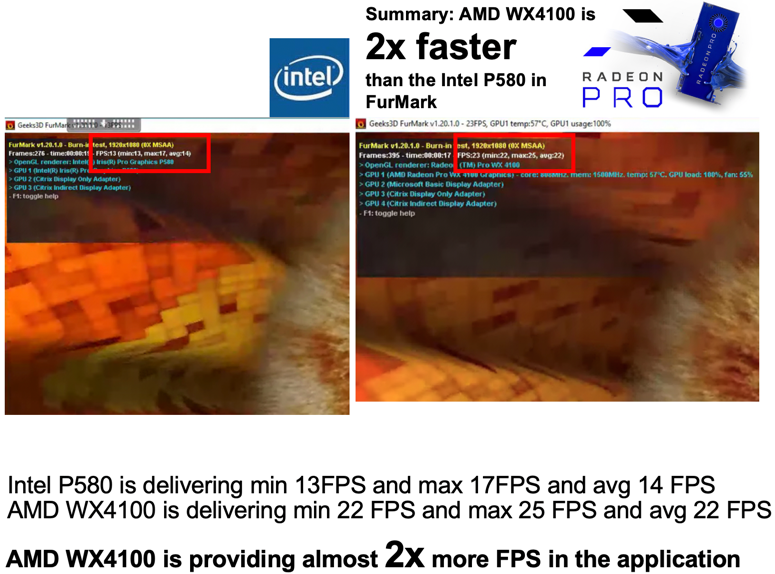 Major new features and upgrades in SPECworkstation 3 include: 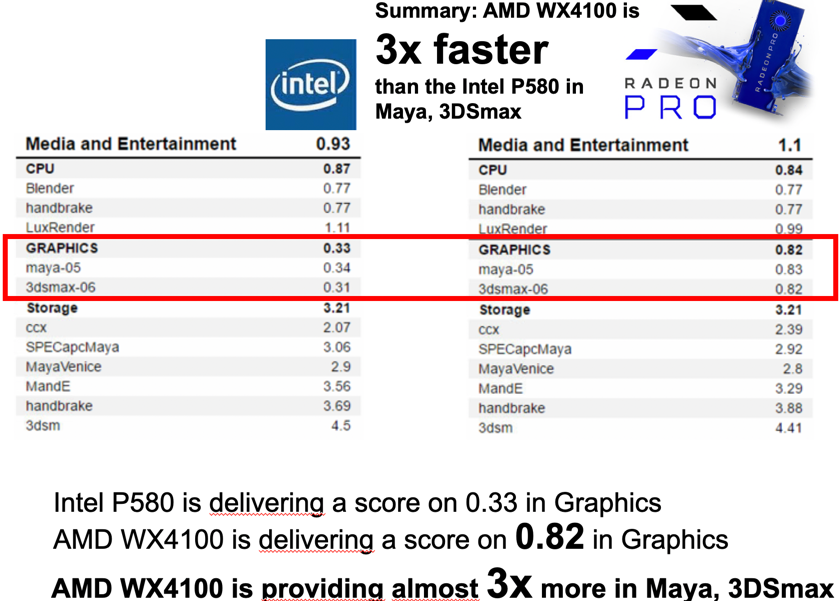 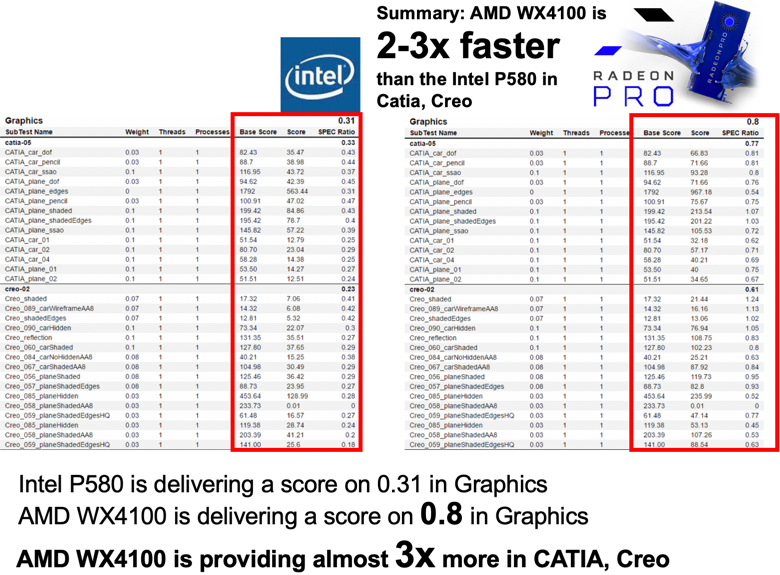 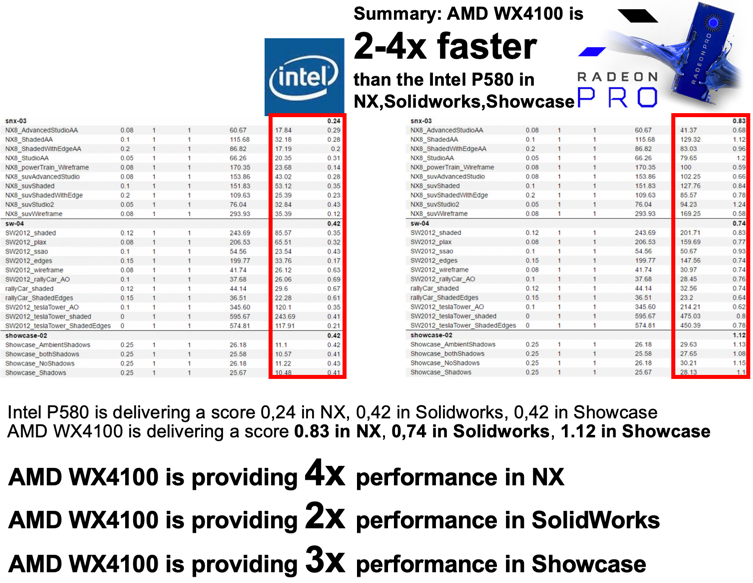 Basemark GPU is a new vendor in the benchmarking world, the company is from Finland. 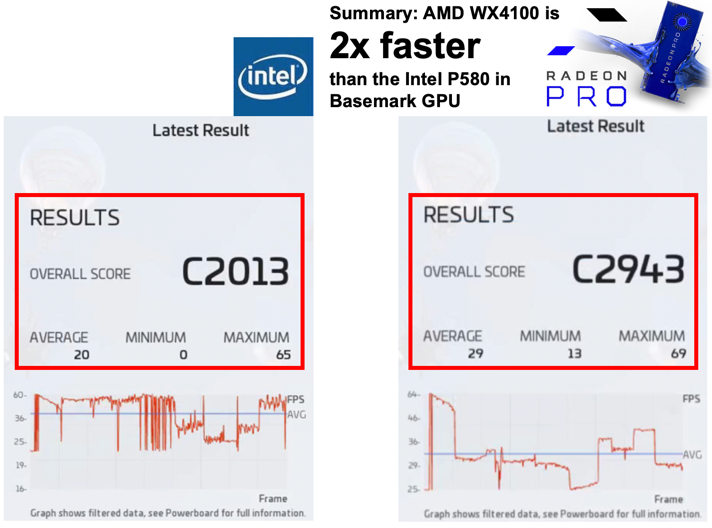 Unigine have very popular benchmark tools that the EUC community, partners, customers uses this is why I have included this great tool. 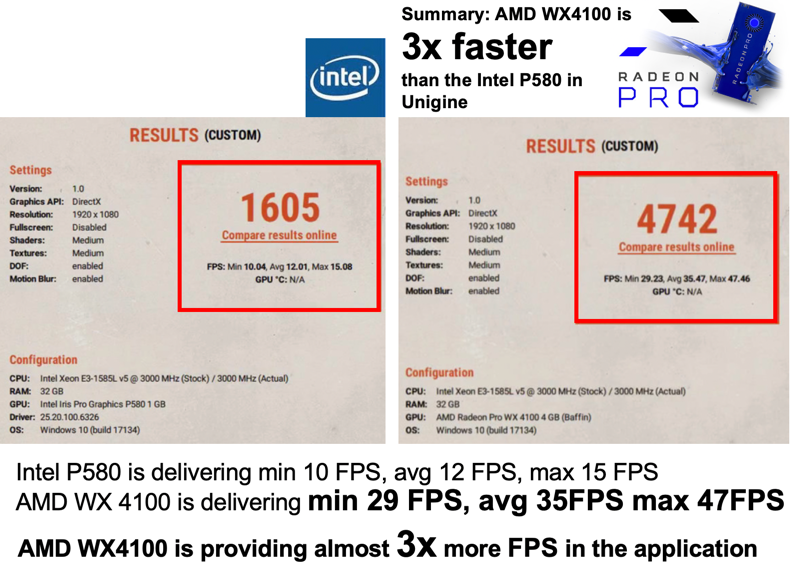 Above article is written myself as an independent blogger/consultant and the results of the testing of the CAD applications was accomplished by Thomas Poppelgaard and sponsored by HPE. The methodology are as is and samples can be required if the readers would like the material to reproduce the same results.

if you are interested in testing your applications on the HPE Edgeline EL4000v2 with HPE ProLiant Server blade m710x with Intel P580 GPU or with AMD WX4100 GPU – please dont hesitate to contact me a thomas@poppelgaard.com

Citrix announcement Citrix shines at HPE Discover Madrid 2018: A look back and what’s next