The Promise and Challenge of Video on Virtual Desktops

Desktop virtualization continues to win mindshare of IT professionals. For many applications, it offers an excellent method to secure data, provide a consistent user experience, centralize computing resources, and reduce software maintenance costs. However, such benefits do not come without tradeoffs. The transfer of graphical data representing the user interface from a virtual desktop in the datacenter to a remote user’s Citrix Receiver running on a physical desktop can lead to an increase in network traffic. The network load grows significantly when a virtual desktop is rendering rapidly changing images (frames), as is the case with video playback. Running such common desktop applications as media players by many clients simultaneously, strains the network and may affect the performance of other business applications, especially during peak hours.

The core of the problem is that wide area networks (WANs) between branch offices and data centers often do not have the capacity to carry the amount of traffic associated with hundreds of remote users simultaneously accessing a video, such as a live webcast, in a virtual environment. As video becomes more popular within the enterprise, unique methods will need to be employed to maintain WAN performance for virtual desktops.

Citrix XenDesktop provides several methods for enhancing video delivery and rendering on virtual desktops. Among these methods is client‐side rendering using HDX Flash Redirection for Flash video. We examined this method closely in a Qumu whitepaper titled “Optimization of streaming video delivery in Citrix XenDesktop deployments with Qumu VideoEdge”. In that paper we described how Qumu VideoEdge, when deployed at branch offices utilizing Citrix XenDesktop and Flash Redirection, can dramatically reduce WAN traffic.

Citrix has been a market leader in providing desktop virtualization solutions for years. Citrix XenDesktop with HDX Technology was specifically designed to optimize network utilization and improve the end‐ user experience for graphically intensive rendering. HDX takes advantage of Citrix SmartRendering technology and provides two methods of delivering video streams to the player: server‐side and client‐ side fetching. For server‐side fetching, which is available for Flash and Windows Media, the video stream is obtained by the server and then sent over ICA in its native highly compressed format. While often providing significant bandwidth savings over sending screen updates over ICA, it still requires considerable WAN bandwidth to carry the streams when tens or hundreds of users watch the video from the same branch.

For client‐side fetching, which is available for Flash streaming, the client pulls the Flash content directly from the stream source, bypassing ICA altogether. This is the preferred method for Flash streaming on LANs, but it still does not completely resolve the WAN bandwidth issue. When the stream originates from a data center, and is sent to players in a branch office, each player creates a separate connection over the WAN, causing the bandwidth to grow linearly as each new user joins a video session.

Qumu VideoEdge is a proxy‐cache server specifically optimized for video delivery to remote users. For video‐on‐demand, it provides file caching at the branch, thus preventing the end‐user from pulling video over the WAN unnecessarily. VideoEdge can cache content passively (on the first request) or preposition it if scheduled by a content publisher or network administrator. For live streaming, a VideoEdge installed in a branch location receives a single stream from the origin over the WAN, and then “splits” it to tens or hundreds of clients on the branch LAN. Deploying VideoEdge with Citrix HDX Flash Redirection is therefore an ideal scenario that completely frees up the WAN from carrying video to Citrix Receivers in the branch.

The figures below describe how video crosses the WAN and reaches the virtual desktop. Figure 1 shows the stream flow with HDX Flash Redirection, but without VideoEdge. In this case, all client players in the branch receive video streams directly from the origin Flash Server in the Data Center, causing each stream to consume WAN bandwidth.. Branch Repeater HDXTM technology optimizes on‐demand video streamed via ICA, as well as video delivered directly to the client outside the ICA channel. However, live video streams cannot utilize de‐duplication. 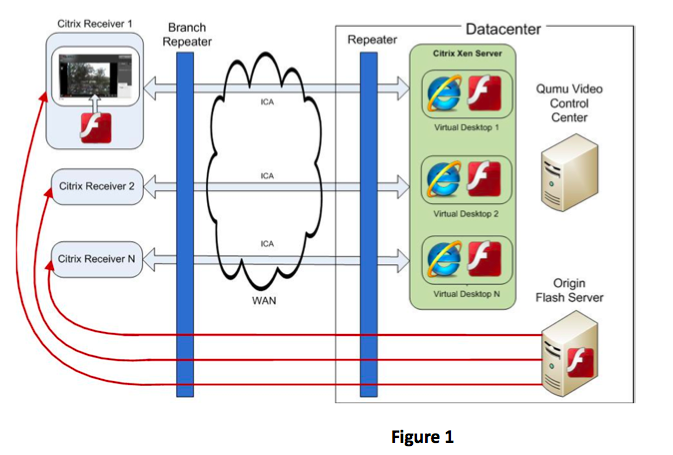 Figure 2 shows the same stream flow with a VideoEdge deployed at the branch. For both live and on‐ demand streaming, the video is served to clients on the LAN directly from the VideoEdge, meaning only a single stream (or none if the on‐demand video is cached) crosses the WAN. 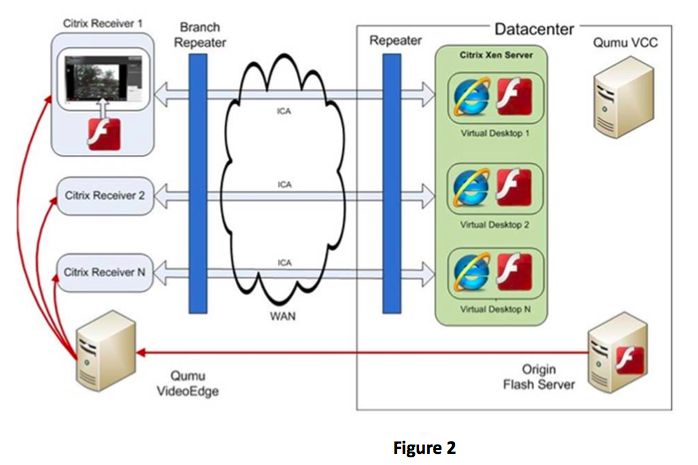 Citrix Branch Repeater HDX WAN Optimization technology accelerates and optimizes WAN traffic for virtual desktops, such as Citrix® XenDesktopTM. The Branch Repeater solution is deployed symmetrically on both sides of the WAN. Some of the technologies used by the Branch Repeater to reduce network traffic include data de‐duplication, adaptive compression, and protocol optimization. Among these methods, data de‐duplication has the greatest impact on video traffic. When a client requests a chunk of data that was previously sent over the WAN, the data will be served by the Branch Repeater at the branch. This technology is applicable to all TCP‐based video protocols and formats. While this is an excellent solution for WAN optimization, it does not cover live video streams. When Branch Repeater is used in concert with Qumu VideoEdge, the joint solution provides bandwidth reduction for all video use cases in the enterprise.

The use cases and deployment scenarios described in the following sections of this document assume that the video content is played by the Flash player and HDX Flash Redirection is configured on the client HDX Receiver.

Use cases for Branch Repeater and Qumu VideoEdge

As discussed earlier, Citrix Branch Repeater significantly reduces bandwidth requirements on the WAN. In tests run in the Qumu performance lab, we observed consistent reduction of WAN bandwidth usage by greater than 98%. Branch Repeater could achieve this number because after a Flash video file was streamed (over the RTMP protocol) by a client in the branch, all subsequent streaming requests from the branch required no more than 1‐2% of the bandwidth consumed by the initial request.

As described earlier, WAN optimization solutions by themselves optimize and accelerate on‐demand video far better than live video streaming. This is due to the fact that live streaming does not result in repeating data patterns across the WAN, so WAN optimizers cannot leverage techniques such as data de‐duplication for such scenarios.

To dramatically reduce required WAN bandwidth for live video, Qumu VideoEdge can be deployed in remote branches. As demonstrated in Figure 2, unlike the scenario in which Branch Repeater is used on its own, VideoEdge ensures that only 1 stream per branch location crosses the WAN. From there, VideoEdge splits the original stream into as many streams as are requested by clients on the LAN. This approach leads to a reduction in WAN bandwidth per branch equal to:

(n x s)‐ s where “n” is the number of branch clients, and “s” is the original stream bitrate.

To demonstrate the bandwidth savings provided by VideoEdge in Citrix deployments, a test environment was built in a Qumu lab. The test environment simulated a Data Center, WAN Cloud and a Branch Office.

The Data Center included the following: 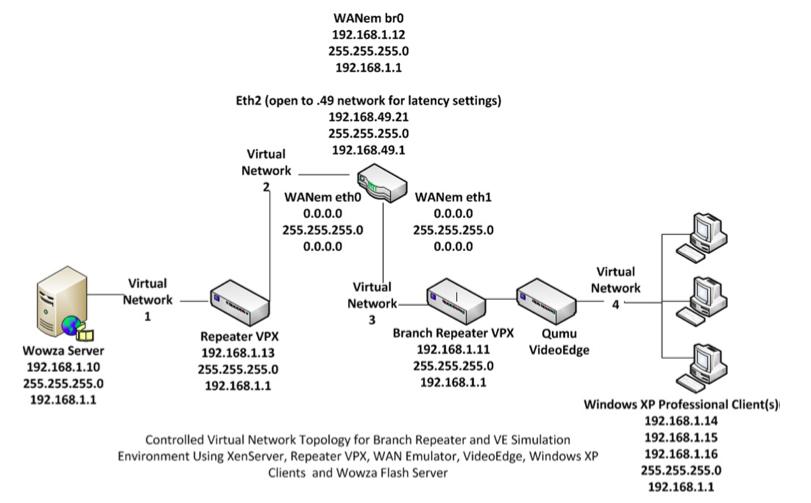 Prior to each test, all caches are reset on the Repeaters.

To measure WAN optimization, ffmpeg is utilized on the Wowza server to create a live event. Clients 1 through 3 request Flash media content from the Wowza Server using HTTP requests, and WAN and LAN traffic is observed on usage graphs in the Monitoring section of the Repeater.

For a live event, Client 1 immediately connects to the session, followed by Client 2 three minutes later, and Client 3 three minutes after that. 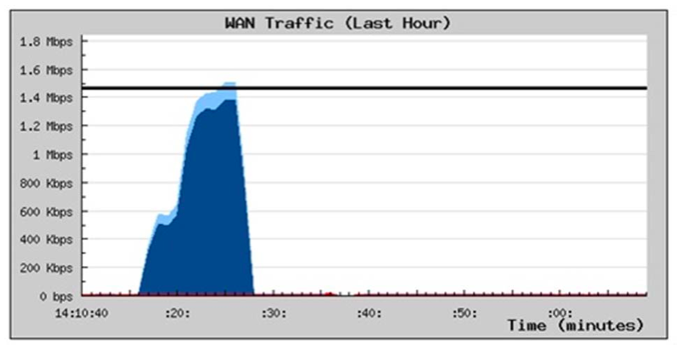 Our tests found that, when Branch Repeater was used on its own for live events, bandwidth usage increased linearly by about 600 Kbps for each client. Since the bandwidth was limited to 1581 Kbps, when the third client connected to the live event, the video quality for all three clients was negatively affected since the WAN could not accommodate the 1800 Kbps needed for the event. 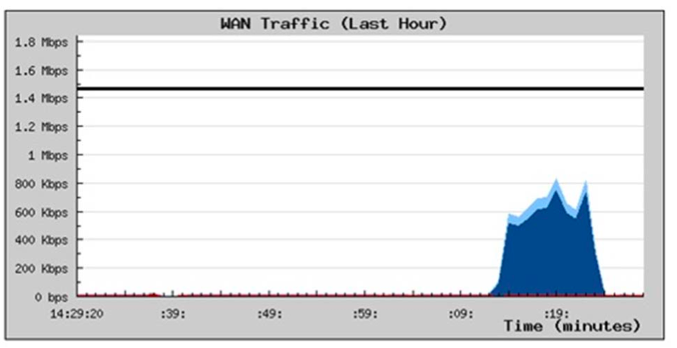 For live events utilizing VideoEdge, WAN traffic was about 600 Kbps throughout the event, as VideoEdge split the single stream that crossed the WAN into 3 separate streams to deliver to the clients on the LAN. As expected, the utilized WAN bandwidth was not affected at all by the number of clients, so as additional clients requested the stream, WAN consumption remained the same. Therefore, the number of clients that can access a live video is only limited by the processing capacity of the VideoEdge appliance at the branch (typically 1500 or more connections, depending on the model).

Citrix Branch Repeater is a fantastic solution for reducing WAN bandwidth requirements and accelerating almost all TCP‐based applications, including on‐demand video streaming. Branch Repeater may be deployed together with Qumu VideoEdge in order to experience the full promise of video communications, including live‐video support for virtual desktops. The joint solution has further benefits for on‐demand video, such as video prepositioning, that significantly reduce the WAN bandwidth required to carry video to branch offices. With Qumu handling and serving video traffic locally, the WAN bandwidth is freed up for Branch Repeater to optimize and accelerate native and virtual apps even more efficiently. As video increasingly becomes a strategic application in the enterprise, the joint Citrix and Qumu solution is designed to ensure remote employees get the freedom to utilize the power of video without impacting other business applications.