The overall goal of this White paper is to provide sizing baselines for the deployment of Citrix XenDesktop on IBM BladeCenter Servers running Citrix XenServer.

A laboratory environment was created to test and validate the different components of the IBM hardware and the XenDesktop solution. The main focus of all tests conducted in the laboratory was to define the optimum number of virtual desktops that can be hosted on a single IBM BladeCenter HX5 server.

Reference configuration of the environment, methodology for conducting tests, and the findings from tests performed are presented in this document.

This document assumes that the reader has an architectural understanding of blade server hardware, storage area networks, and the Citrix XenDesktop Platinum components.

The laboratory environment used for conducting all tests was based on the IBM BladeCenter HX5 Blade Server and the IBM System Storage N5200.

The IBM System Storage N5200 featured a cluster of two controllers and the IBM EXN4000 disk expansion unit with 14 FC 15K HDDs. The N5200 was attached to the HX5 Blade servers via 2Gbit Fiber Channel.

The latest release of the Citrix XenDesktop 5 components available at the time of testing were used to build the laboratory virtual desktop infrastructure. The XenDesktop 5 Site consisted of:

Citrix Licensing and Web Interface servers were also deployed as part of the environment. All of the XenDesktop 5 infrastructure servers were virtualized on XenServer 5.6 FP1.

Memory utilization was determined to be the main bottleneck limiting the server from effectively hosting additional desktops with the XenServer virtual desktop host reporting 98% of RAM utilization with 80 active desktops. 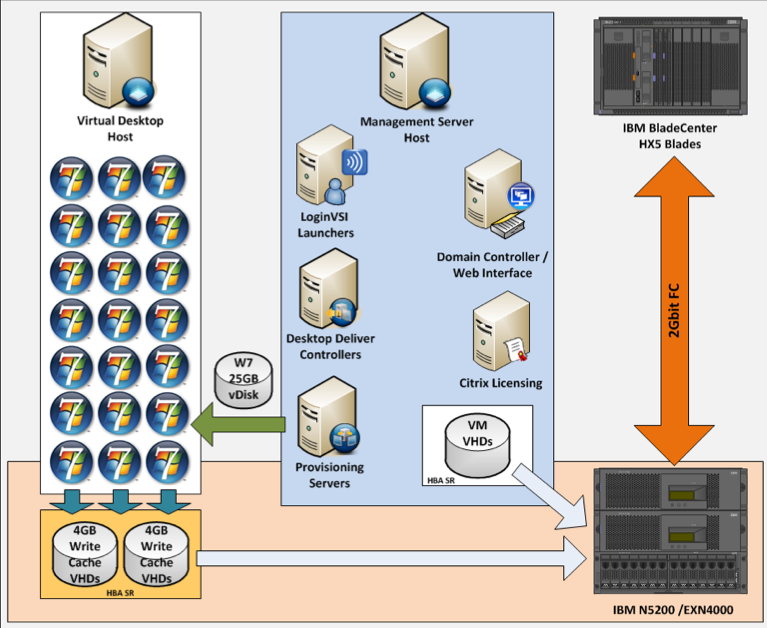